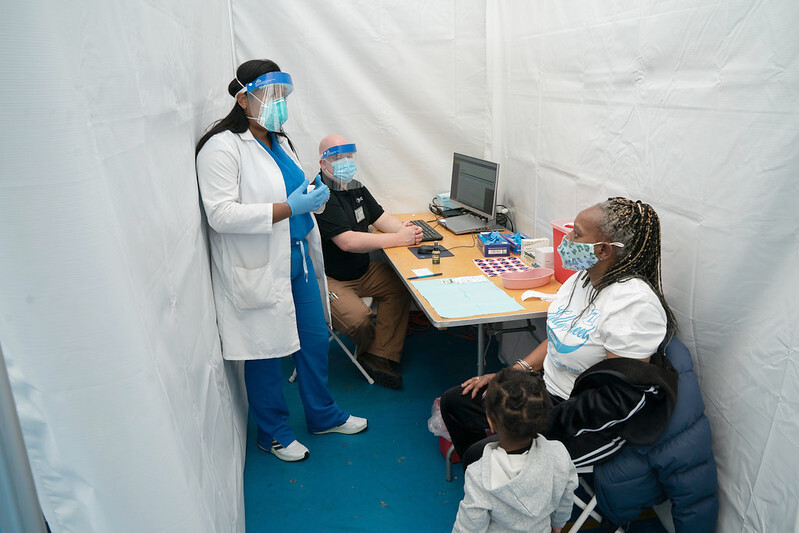 As the Thanksgiving holiday begins, COVID-19 rates are spiking in many parts of upstate New York. So far, local governments have been left to manage the spread of the disease on their own. Now some county leaders are looking to the state, and Governor Kathy Hochul, for more help.

Erie County, which includes the city of Buffalo, is experiencing some of the highest infection rates since the pandemic began.

Erie County Executive Mark Poloncarz says there were nearly 800 new cases a day late last week, the vast majority of them in younger, unvaccinated people. The transmission rate is nearly 10%. Poloncarz on Monday reimposed a mask mandate for all public indoor venues.

“A mask mandate for all indoor public locations in Erie County,” Poloncarz said. “The patrons and staff that are public-facing and deal with the public, and the patrons that come in, will all have to wear a mask.”

The rule applies to restaurants, stores, theaters, and sporting events, as well as at gyms and barber shops and beauty salons.

Poloncarz says he will reassess on December 13th how well the mask mandate is working, based on positivity rates and how many people are in hospitals with the disease. Hospitals in the county are reaching capacity. If the numbers do not decline, he says he will move to require proof of vaccination for anyone who wants to enter a public indoor space, including restaurants, movie theaters and sporting events.

“You cannot go into the faculty unless you’ve been vaccinated,” he said. “Very similar to what you see in New York City right now.”

New York City requires indoor masking and proof of vaccination for any public indoor activities. The rate of the virus has been around 1 and a half %, the lowest in the state.

In Albany County, where the current positivity rate of nearly 7% is higher than in November 2020, County Executive Dan McCoy is asking Hochul for more help.

“I would prefer the governor to act, instead of Albany County having to go it alone,” McCoy said.

He cites the example of President Biden imposing a vaccine mandate on all businesses that employ 100 or more people.

McCoy warns that his county may also impose mask mandates soon. He says he is reluctant to do so, because it punishes the majority of people who have taken their vaccines.

“And why do you penalize everyone else who has done the right thing?” asked McCoy, who added that 75% of adults in his county have received at least one dose of the vaccine.

McCoy also says the governor and her staff could do more to help with the high costs of COVID tests, which cost an average of $125 dollars, and are often required for school children to reenter the classroom after an outbreak at their school.

The New York State Association of Counties has written the governor a letter, asking for the reopening of free of charge mass testing sites. The counties also want the state to use its buying power to purchase and distribute lower-cost rapid tests, which are often difficult to purchase due to shortages.

Last year at this time, former Governor Andrew Cuomo, who had been granted special emergency powers by the state Legislature, had more authority to declare statewide lockdowns and mask mandates. Cuomo resigned in August over a sexual harassment scandal.

Hochul does not have those powers, and has largely left the decisions on whether to impose COVID-related regulations up to local governments.

Poloncarz, who is an ally of Hochul’s, says he’s happy with the governor’s decision.

“I do not believe they’ll go back to statewide (rules),” said Poloncarz, who said the governor is “empowering local governments” to take “appropriate action”.

County leaders are not the only ones critical of Hochul. Her political rival, state Attorney General Tish James, says that “state government is failing to act” to manage the crisis, and has proposed her own plan.

James, who is running against Hochul in the 2022 Democratic primary for governor, says more direct action is needed in communities where there are high rates of unvaccinated people.

Late in the day, Hochul released a prerecorded video message. She did not advocate for any new statewide rules to fight the virus, but said she is working closely with county leaders around the state where the numbers are spiking.

She instead urged voluntary efforts to help curb the spread at holiday dinners and weekend shopping and other activities.

“Limit the gatherings to only vaccinated family and loved ones. And if you can, please get tested prior to seeing anyone who’s at high risk. If the weather permits open the windows and doors,” Hochul said. “If you feel sick, definitely please stay home.”

Hochul asked businesses to require that their staff and customers be vaccinated, and that everyone wear masks in public indoor settings. And, she urged those who have received their shots, to try to convince resistant unvaccinated family and friends to change their minds.